If I'm being honest, I'd admit that I didn't really know what Pan Haggerty is until I did a quick search for it on the internet. And then I realised that I'd been eating something very similar to it for years. While I was at university I had a boyfriend called Steve who lived in Derbyshire and when I used to visit them his mother would layer up potatoes and onions, scatter the whole lot with grated Cheddar and bake it all in a roasting dish for us to share with some lamb chops or sausages. I've made it myself a few times, changing things as I go along and here's how I make it. Now that I know what it is.

The action of frying the potatoes in a single layer in a pan first is a long one, but one that shouldn't be avoided as all of the buttery juices give so much flavour to the dish - and you can be sure as well that it will all be cooked through (nothing like baking something for 45 minutes and then finding a slice of semi-raw potato halfway down).

Pan Haggerty is thought to come from the North of England, is real comfort food and an excellent example of something being created out of the ingredients available at any one time. People have said that it should really be cooked in a pan but then I think that cooking it in the oven means that the heat is much more evenly distributed. It's cheap to make, too - we eat ours mostly with some good quality baked sausages, all crisp and sticky from a hot spell in the oven. 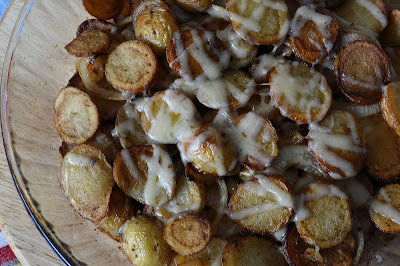