There's a recipe in Jamie Oliver's 30-Minute Meals, where you chuck salmon fillets, prawns, asparagus and tomatoes in a tray and grill for a few minutes, until it's all cooked. He serves it with a green salsa, and boiled new potatoes.

And so I decided to do something, admittedly very similar, but without the salmon; and instead of a green salsa, I just wanted to sprinkle it all with sea salt, lemon and parsley. And it was brilliant. And, amazingly, probably the easiest thing I've ever cooked, despite it looking a bit showbizzy and something you could show off about with your friends (if you wanted to).

What surprised me most I think about this, was the reaction of the children. I took the floppy grey, armoured little prawns out of the pack to show them, with their spindly legs and long antennae and they LOVED it. I think we adults think it's probably best not to show kids things like this and serve them up all pink and sweet and juicy and just hope that they eat it, but I'm often surprised by the foods they get excited about. And when they were cooked, my husband taught them how to take off the heads and peel the crisp shells off. They schnaffled down almost the lot, leaving only a couple for us. Must rememer to buy more next time... 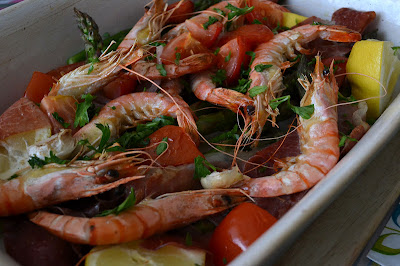