Heston's Vanilla Back Bacon, for Waitrose 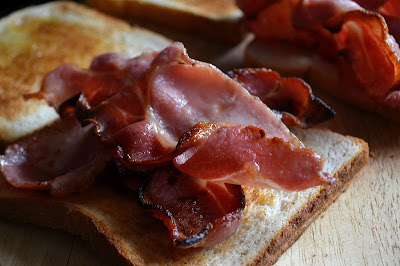 Part of the reason I love shopping at Waitrose is that you can pick up some really unusual foods, especially since they teamed up with Heston Blumenthal. Among loads of other foods, there were mustard ice creams, pine-scented mince pies and now, vanilla back bacon. The bacon is rubbed with ground vanilla pods and brown sugar and left to mature - you can even see the tiny black seeds when you open the pack, all speckled onto the pink bacon slices.

The first thing I would say about this bacon is that it's very thinly sliced, but that's not so bad because it crispens up under the grill easily. The second thing I would say is that you need to try this, even if it's just for the smell it makes when it's under the grill. It's sweet, smoky and salty - a bit like the way you imagine old-fashioned fairgrounds to smell, as you walk between hot dog stands and doughnut and candy floss stalls. 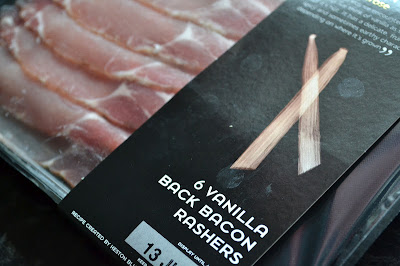 On the pack, there's a quote from Heston:

"Because as kids we encounter it in desserts, we think of vanilla as sweet but it's not. It has a delicate, fruity, spicy and sometimes earthy character, depending on where it's grown."

We ate ours, crammed between slices of toast. It's not overly sweet, as you would expect it to taste, but you can detect the musky vanilla tones as you eat. I'd recommend eating it plain (we just used a smidge of butter on the toast) and don't douse it with ketchup or brown sauce or whatever else you eat on your bacon sarnies because then you'll lose all the flavour.

At £3.29 for six thin little rashers, it's not cheap. But I would buy it again. Waitrose suggest using this in sandwiches, in salads or even in risottos. I'd have a slice or two in a burger, with all the trimmings. Try it, and tell me what you think. 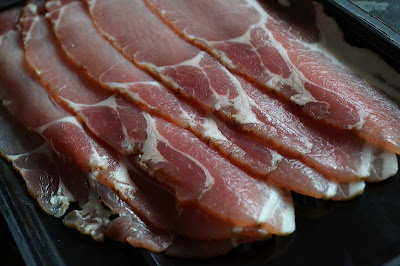 Have you tried Heston's vanilla back bacon? What did you think of it?
Email Post
Labels: meat product reviews