You may remember the Vine Tomatoes with British Buffalo Mozzarella recipe that I made last year, that went with a lovely lemon and basil dressing. Well, Love the Garden are running a new competition this month, to honour the leek. I love leeks, chopped with garlic and fried slowly in butter, a splash of Marsala and then tossed into pasta. Or in a chicken pie. But for this month's challenge, I decided to try something I'd never tried before: leeks with salmon. 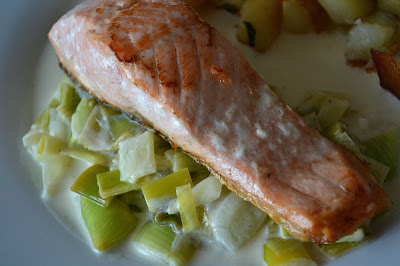 The green, oniony leek works really well with the soft, oily flesh of salmon. You'd think that it would be a bit too overwhelming with all that cream in there, too - but there isn't actually much. The leeks are cooked in white wine with a little swirl of cream added at the end. I loved this; a perfect dish for Spring. You could add some frozen petits pois to the leeks 5 minutes before the end of cooking if you wanted to. We ate ours with diced potatoes that had been roasted with garlic and parsley. Delicious! 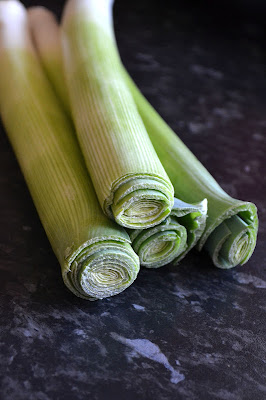