A few months ago, there was a lot of hype surrounding one particular brand of coffee: Kenco Millicano. It was touted as an instant coffee with all the taste of filter coffee and ads started to appear on TV showing a Mum walking to school in a dressing gown to reclaim her sacred tub of the stuff from the harvest festival table. Well, eventually I gave in and tried it. I found it, in all honesty, to be no better than the usual instant coffee we buy and gave it to someone else to try. 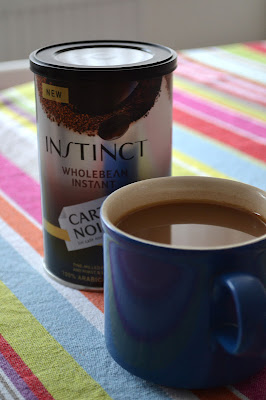 And then, more recently, I was contacted by Carte Noire, who asked if I would like to try their new instant coffee. Wondering, after my Millicano experience, if an instant coffee could ever really compare with the proper stuff, I agreed. And I really liked it. What Carte Noire have done is add 15% finely milled roasted coffee beans to their instant coffee, so you get a much darker, richer cup than the usual instant coffee. The rich flavours build as you drink, too - so the flavour develops all the way through your cuppa. Even the best instant coffees I've had up until now don't do that.

Carte Noire Instinct was launched in February this year, and this is the first major product launch it's had since the brand came to the UK in 1996. Carte Noire call it "a deliciously silky and deeply aromatic cup of coffee that will seduce your palate with every sip". But is it as good as filter coffee? Personally, I don't think it tastes exactly the same, but then it doesn't claim to. And the flavour is rich and smooth, so does come very close. I liked it, and would buy it again.

For more information check out the Carte Noire Instinct Facebook Page or look out for it in your local supermarket. 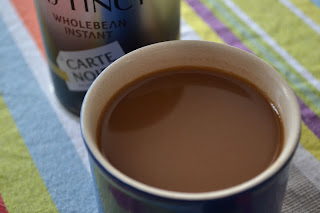