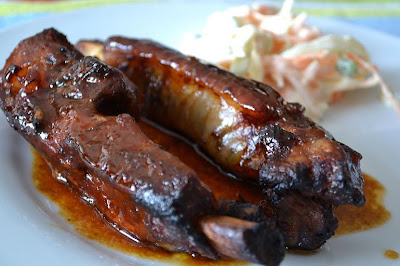 I seem to be cooking all sorts in the slow cooker these days﻿, and using it more often than my oven for cooking meat. I sometimes feel that slow cookers are regarded as a bit old-fashioned these days; even Nigella gave them a thumbs down in the introduction to her book Kitchen. But I love mine, and it's become as essential in our kitchen as the toaster or kettle.

I happened to notice a barbecue ribs recipe done in the slow cooker on Pinterest the other day and so I thought I'd give it a go myself. The recipe I saw suggested standing up a whole rack of back ribs in the slow cooker on its side but as my ribs were all chopped into individual chunks, I just slathered them in BBQ sauce and dumped them into the crockpot but made sure to put a layer of onions on the base to stop them sticking. There isn't much liquid at all and so I was paranoid about it sitting on the bottom and the meat sticking to it in a jammy mess. But it didn't. The onions, as they cook, let off quite a bit of steam by themselves, helping to cook the ribs.

They were so easy to make, soft and tender and the meat just fell off the bone. My children loved the carnivore element of nibbling on the ribs and we served ours up with home-made coleslaw and chips. Next time I make them I'm going to give them a Chinese marinade instead. Cheap, cheerful and so, so tasty. 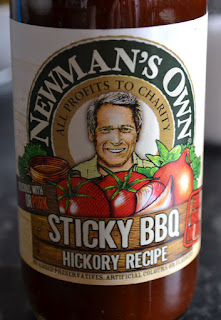