The Last Meal on the Titanic

This April marks the 100th anniversary of the tragic sinking of the Titanic, which took place on the night of the 14th April 1912. The story of the Titanic has always fascinated me, even since I was a child. I grew up in Southampton, where the cruise liner set off at Southampton docks for New York. Many of the workers on the ship were from Southampton and the city suffered a huge loss of life when she sank.

A few years ago I managed to trace back my paternal family tree to 1730. I stumbled across a document from 1912 which named a relative of mine as due to work in the engineering room of the Titanic: but for whatever reason, he was listed as never showing up that day for work - a decision which might have ultimately saved his life.
We were also in for a treat one day at school. I remember being about 9 years old, and we had a visit from one of Titanic's survivors. He was I think 4 years old on board the ship and he sat with us in the school library and shared what he remembered from that day. And even though he was very young at the time, his memory was vivid. He remembered the panic, he remembered the lights going out on the huge ship and he remembered being rescued on the lifeboat.

To mark the event in my own special way, I decided to cook my version of the last meal that was served in the first class dining room on board Titanic on the night that she sank. The first class diners ate lavishly. Unaware of their fate that night, they feasted on oysters, roasted duckling, beef and various soups. They washed it all down with champagne (unopened champagne bottles can be seen on the seabed next to the wreck), before finishing off with chocolate and vanilla éclairs, French ice cream and a peculiar dessert named 'Waldorf pudding'. It's not thought that this necessarily has anything to do with the Waldorf Salad of apples, walnuts and celery but records from the menus of other liners at the time suggest it was a creamy vanilla pudding with diced apples and nutmeg.

For my Titanic feast, I chose a starter of salmon mousseline: a poached salmon fillet with a moussey, tarragon-flavoured sauce. Chefs on the Titanic served this up with cucumber, and for the sake of authenticity, I did too. For the sauce, you just whisk egg yolks, white wine vinegar and Dijon mustard together, trickle in some melted butter, whisking all the time, and finally gently fold in some foamy whipped cream. It was a huge success. The mousseline sauce cut through the oily salmon and was so light to eat you'd never guess it was made up of such rich ingredients. For modern tastes, I did wonder if the cucumber was necessary; the mousseline sauce is fresh-tasting enough. But we loved it. I used Kevin Woodford's recipe if you want to make it yourself. 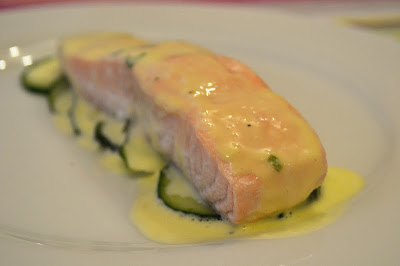 For the main course, I chose lamb, which was served up on Titanic with creamed carrots, green peas and parmentier potatoes. Parmentier potatoes is just a fancy name for diced potatoes that are roasted with herbs, and they were easy enough to make. The lamb was also served up on the cruise ship with mint sauce - an old-fashioned but great combination, and the Parmentier potatoes were cooked with butter, chopped parsley and (I couldn't help myself) a crushed garlic clove or two. I doubt they would have had frozen peas on Titanic - or fresh - they were most likely tinned I would have thought. 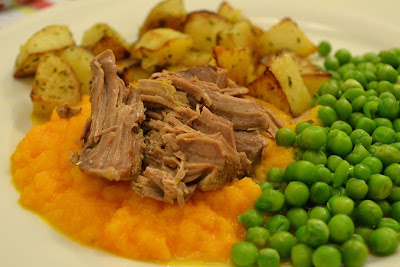 Finally, to finish, we tucked into chocolate and vanilla éclairs. These were gorgeous, and far better-tasting than anything ready-prepared and bought from a shop. I whipped the cream and added only the seeds from a vanilla pod - no sugar. I then split the choux buns, filled them with the vanilla cream and gave each of them a topping of dark chocolate sauce. They were small - enough for a couple of bites. But they were enough. It just goes to show how rich the first class food on Titanic was. I used Simon Rimmer's recipe, but just added vanilla seeds to the whipped cream. 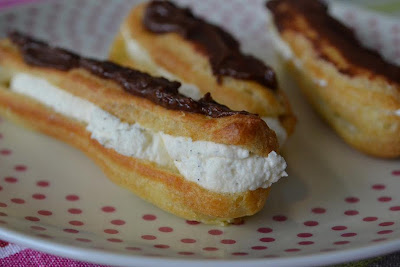 I enjoyed my experiment and my travel back in time to make this meal - but while it does bring home the lavish diet of first class Edwardian passengers, it also gave me a sense of respect and what each of those passengers and crew members went through on that night in the cold, icy Atlantic.