Well, it had to happen some time. I've been cooking Jamie's recipes for years and everything went pretty much smoothly up until now. Up until I decided to pluck Jamie's Happy Days with the Naked Chef from the bookshelf and make courgette and goat's cheese bread. 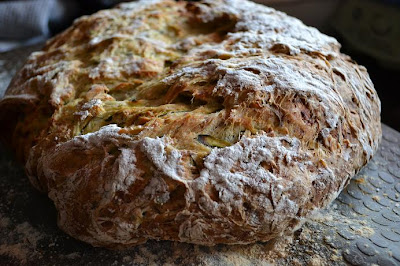 The recipe states to take a basic bread dough and mix in 6 large courgettes (grated) and two small rounds of goat's cheese, crumbled up. Then you knead it all together, let it prove and chuck it in the oven for half an hour, where it should emerge, as the photo in the book proves - fluffy, light and speckled with green.

For me, not so. I did follow his advice that the courgettes will let off some of their own water and so only added just under half a pint of it - as instructed - to the 1kg of bread flour, yeast, salt and sugar. My courgettes were pretty massive so I only grated up 5 and added them to the mixture. I was even careful to watch the clock while I kneaded for the required 10 minutes "until it stops being sticky" but I was still there, waiting for it to lose its stickiness 20 minutes in.

To try and save it, I kept chucking on more flour, which didn't help, it just soaked it up and went sticky again. Eventually, with probably another half a bag of flour added, it did lose its stickiness and became a floury, elastic lump. I left it to prove, bunged it in the oven and checked after half an hour. When I tapped the bottom of the loaf it made a dull, hollow sound. So I waited for it to cool slightly and cut into it. It was like sticky, heavy stodge. And it seemed like the dough wasn't cooked. 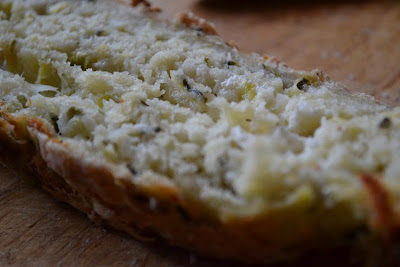 So it went back in the oven. An HOUR later, I took it out, left it to cool and cut. It was still like stodge, only more burnt around the outside.

I think it was actually cooked, but there was too much courgette in it, which made it too moist and soggy. We managed to eat some of the crust but the rest had to be thrown away in the compost bin. Such a disaster, and I was really fed up to have lost all that goat's cheese, too.

Make me feel better! Have you had any kitchen disasters?