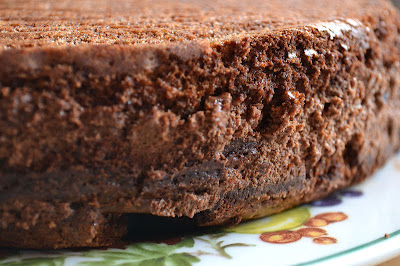 You have to treat this cake with care - whisking egg whites, egg yolks and double cream in various stages until they form the correct-shaped peaks. I folded it gently, scraped it carefully into the correct tin and then shut the oven door as if putting it to bed, so as not to knock all the air out of it and it still threw a wobbly at me by breaking apart when I tried to sandwich it all together. So I served it upside-down. 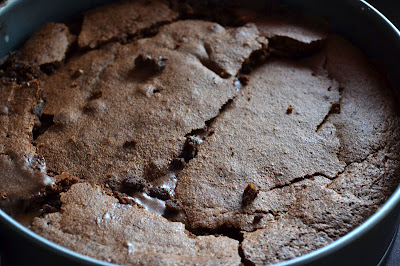 The recipe called for coffee liqueur to be drizzled over the slabs of cooked cake, but I didn't have any so laced it instead with some Bols chocolate liqueur. On the plus side, it doesn't contain huge amounts of butter or even sugar - but it does use up industrial amounts of chocolate (which really makes up for the sugar) and a total of 9 eggs - yes, all patiently separated and whisked in four separate bowls. The whole thing took 4 hours to make, including cooling time plus an overnight chill in the fridge to set it all together - and four lots of washing up. Would I make it again? Probably not. It left me exhausted. But I would hope that someone else might make one for me instead. 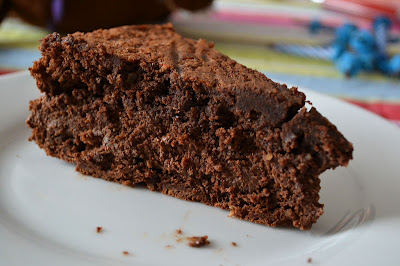 It was amazing. The cake itself was intensely chocolatey and the mousse was fluffy and creamy. I was actually glad I had skipped the chocolate icing on top, because it really was rich enough as it was, at least for us. The cake layers practically melted in the mouth while the mousse inbetween was gooey and soft. It was, I think, the most amazing cake I have ever made. I just wish it came without all the moody attitude to begin with.

You can make the recipe yourself (get an electric whisk ready if you do) at the Delicious website.