Last month, The Royal Society of Chemists proclaimed that they had unearthered Britain's cheapest snack, and offered £200 to anyone who could make one that was even cheaper. Costing 7.5p, the toast sandwich (I kid you not) was mentioned in Isabella Beeton's Book of Household Management, in the nineteenth century. 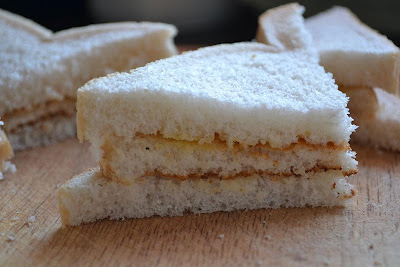 In their report, the BBC quoted Dr John Emsley fom the society, who said: "you simply put a piece of dry toast between two slices of bread and butter, with salt and pepper to taste. I've tried it and it's surprisingly nice to eat and quite filling."

Intrigued and actually quite sceptical that a piece of toast between two slices of bread could be 'surprisingly nice to eat', I made one myself.

It was incredibly easy to make, of course - and took a couple of minutes. But once you give it a good grinding of pepper and a sprinkle of salt and layer the buttered bread over the top, the fun ends there. It was stodgy, fairly tasteless and there wasn't really any moisture at all so it tasted really dry. The only good thing about it was that it reminded me of a chip butty - but only because the semi-melted butter oozes onto the soft bread on the outside, in the same way as a warm chip sandwich does.

So at the risk of being a party pooper, I'm sorry, but there are some things that should stay in the Victorian era, and the toast sandwich is one of them. Sorry, folks.
Email Post
Labels: weird food