I mentioned that, in this round of Worldfoods challenges I wanted to try and do something different from last time. And, when I used the lemongrass and turmeric marinade to make satay before, I made chicken, beef and prawn kebabs, which didn't leave a lot of room to try something different this time around. Except fish. 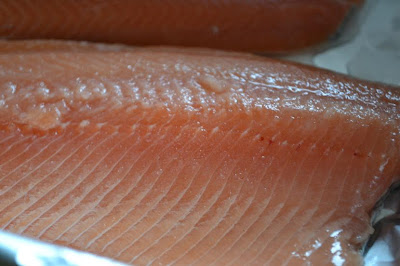 I've been cooking trout quite a bit lately, and using it as a cheaper alternative to salmon. And I'd read recently that fish satay is popular in Malaysia, so I decided to use this marinade on some trout fillets.

I pin-boned the fillets, laid them out in an oven dish lined with foil and doused them in the marinade, leaving it for about 30 minutes. I then gathered the foil over the top to make a parcel and pinched the ends to seal it. After 15 minutes at 190C it was ready. 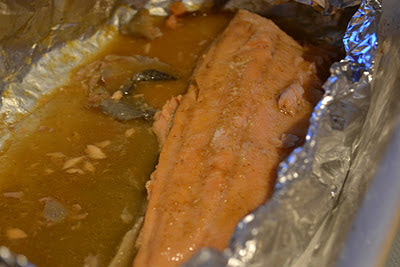 The marinade had given the fish a sweet, lemony flavour and you could definitely taste the muskiness of the turmeric in there too. I kept the juices that were left behind in the foil and spooned this over the fish before serving. Just goes to show that you can perk up a trout or salmon fillet easily with marinades such as this one. You could try it with a white fish fillet such as pollack or whiting too. I'd definitely serve this with some soft, fluffy rice and maybe some stir-fried vegetables, with the juices in the foil spooned over. Lovely.


Check out the Worldfoods Facebook Page to keep up with what they're doing and to see what other delights the rest of the Fusion Taste Team have been cooking up.