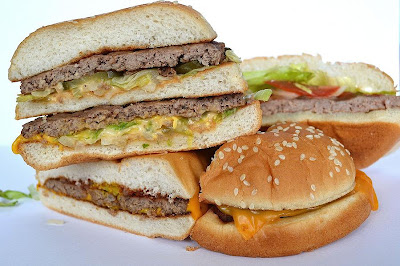 I recently did some research for a piece about burgers from well-known fast food chains. Now, I always thought people bought burgers on the go because they're cheap. It turns out that they're not. My bill at KFC for two small chicken burgers (no fries, no drink, nothing really special) came to over £7. A Whopper at my local Burger King was I think £3.59 - I also remember them much bigger when I was at uni - but that's pretty much the same for all foods I remember from my earlier youth. Everything seems to have shrunken (Snickers, Mars Bars, Findus Crispy Pancakes, etc...).


Confused about this, and as I have a weakness for pie charts and all things stats - I decided to carry out a survey of my own. I asked my followers on Twitter and Facebook friends to take part in a short, 60-second survey just revealing the reasons why they buy fast food when they're out and about. The results kind of shocked me.


As it turns out, people don't buy fast food because it's cheap - they buy it because it's quick. A whopping 75% of people responded that it was because fast food really was fast. No one admitted that it was because of inability or lack of confidence in the kitchen at home - and only 18.8% said that price was a consideration. Interestingly only 50% said that they bought it because they liked the taste.


Here are the full results below:

So there are all sorts of reasons people nip out for a quick burger - it's convenient, quick and pleases the children. But it seems from this (admittedly fairly unscientific) survey that some people are buying it even though it's expensive and even if they don't much like the taste.

So what do you think? Why do you buy fast food?