This post contains some affiliate links. This means that if you click through and make a purchase, I might receive a small commission that goes back in to me keeping the blog going. Thanks for your support! 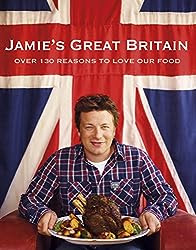 Everyone gets excited about cookery programmes - but I'm sure that  some TV cookery series are just an advert for the book that inevitably comes out with it. And I'm a sucker for it. I saw Jamie wolfing down smoked trout paté smeared onto mini Yorkshire puddings, knocking up meltingly tender lamb shanks with a thick, rich gravy and barbecueing fish on the seafront. Jamie eats. He winks. He sneaks in a double-meaning or two. It's funny, clever, indulgent, cheeky and, at times, saucy.

So, fuelled by all this - and with the knowledge that Jamie was conceived at the end of Southend pier (he kept on about that a bit, didn't he?) I went out and bought Jamie's Great Britain book. To save on a carrier bag, I tucked my new cookbook under my arm and went about my business in town. Everyone that passed me made conversation about it - the lady in the clothes shop, the bloke on his lunch break - even the cheeky bus driver ("what are you cookin' tonight, then love?"). This is the effect that Jamie has on people. He's loved by the British public and hailed by some a hero - for transforming school dinners, teaching many of us how to cook and for his raw, down to earth approach to food. 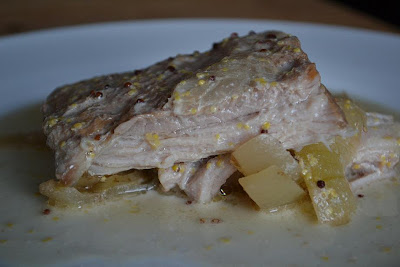 ﻿﻿Jamie's written books on Spain, Italy and America - and at first it seems a shame that it's taken him so long to write a book about his native Britain, a fact that he confronts in the introduction to the book. He says that it "has been a long time coming". But in a way, that's good. Jamie says that he sees Britain differently as he used to: "I'm not a teenager any more. I'm a father with four kids and a different perspective on my own country, and it's definitely one that I'm proud to share with you here."

When I first heard about it, I expected the book to be a collection of stodgy suet puddings, stewed meats and different takes on fish and chips. But it's nothing like that. It praises the influences this country has had over the thousands of years of immigration that has happened within it. Jamie takes the food cooked all over Britain by the Jewish, Indian and Chinese communities for example, and creates recipes of his own in homage to them. There are recipes from Scotland, Wales, Ireland and England as you'd expect - and it is great to see this as a celebration of what British food means today.
﻿﻿﻿﻿
﻿

The book has photographs of every recipe, which I always love because it helps you decide what to cook and shows you what the finished dish should at least resemble in the end. The overall feeling of the book is fun - yes, there are images of the royal family and the Union Jack peppered about inside it - but there's nothing stuffy or superior about it.
﻿﻿
﻿
I've had a go at some of the recipes in Jamie's Great Britain, and have had mixed success with them, although I'm not sure if that's me or the recipe itself. I made the Guinness Lamb Shanks (p264) but my gravy came out thin and a bit watery - nothing like the thick, rich sauce it should have been. I made the Velvety Chocolate Pots (p370) - the texture was perfect but they were just too sweet. Again, maybe it was the type of chocolate I'd used (the recipe uses milk chocolate and added sugar) or just personal taste. But then each time this happens you know the changes you would make next time, to suit yourself.
﻿﻿﻿﻿

Jamie's Great Britain is a modern and up to date look at the foods that are being produced and enjoyed in Britain and it makes you realise we have so much to be proud of. The book is full of hearty meals that you'd cook any day of the week, by making the most of what British Food means to us now. And for that reason it's bound to be another Christmas best-seller for Jamie.

(All the photos on this page are my own, that I took after following the recipes.)

Have you cooked from the book? And what did you think of the TV series?