OK. So as someone who makes most of my curries now from scratch, I was orginally quite sceptical when asked if I wanted to review a jar of Patak's Biryani sauce. And it sat, on the kitchen worktop for a few days, teasing me, before I ended up using it in a mad panic one night. I'd been waiting around at parents' evening at school, got home late and everyone needed feeding - and fast. The label on the jar promised dinner in 30 minutes. So I tipped it in and wished for the best. 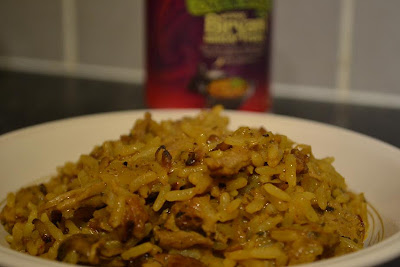 I had loads of shredded leftover lamb from the slow-roasted lamb shoulder we'd had two nights before, so I chucked that in along with the rice and water, gave it a stir, put on the lid and left it alone for 30 minutes. The smell while this was cooking was amazing. Really aromatic and sweet - and this was the 'mild and fruity' sauce. I took it out of the oven for a quick stir about half way through, and as was expected, it had caramelised a little on the bottom. So I scraped up the rice, stirred it through and left it again. But all the caramelisation had given it extra flavour.

As you know, I'm all for using quick-fix sauces if they're up to the job and taste really authentic. And as I make all my curries from scratch now, that's why I was uncertain about it. But to have dinner on the table in just a little less than 30 minutes, and also as it looked after itself while it was in the oven, we decided we would definitely have this again. The only thing I noticed was that there were sultanas in it and everyone here normally complains about fruit in savoury foods. But I said nothing and no one uttered a word. I think they just blend in really well and create an extra sweetness. And we loved the flavour of this sauce, especially with the lamb.

A few days later I bought the next spice-level up: the 'Medium' biryani sauce. The flavours were great - really aromatic - but we found it a bit too spicy to be honest, considering it was labelled 'medium'. I'd expected a little hum, but we feel it went way past that, which is good if you like spice, but not so good if you have hungry little mouths to feed, too. I also threw in some frozen peas for colour and that worked really well, too.

We ate our biryanis with lamb and then chicken, but you could use vegetables or other meats. We loved them - especially the Mild and Fruity variety - and we'll be eating it again.
Email Post
Labels: asian curry indian product reviews