There were a few moments from the TV series of Jamie's Great Britain that had me open-mouthed and almost dribbling, mesmerised by the screen. One was the Will and Kate pie, another was the smoked trout pate. I haven't actually seen Jamie cook this recipe, but I had another of those moments when I opened the book on that page. It's called Worcestershire Beef Sarnie, on page 280 of the book, and it consists of an unrolled joint of brisket that's simmered for around three hours in an entire bottle of Worcestershire sauce, a splash of water and some veg and herbs. 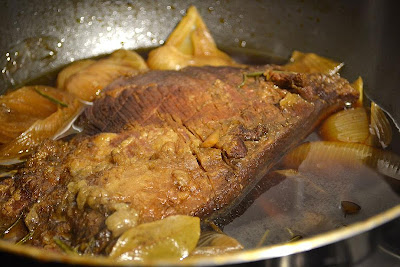 It was easy, taking only about five minutes (or less) to put together, and I left it simmering on the hob for two and a half hours, to come back to meltingly tender beef, soft, sweet onions and a robust dark gravy. It wasn't quite falling apart - I wanted to slice it - but if you like beef to melt then cook it for 4-5 hours instead.

The cooking liquid gave the outside of the meat a really dark colour and a flavour that wasn't as spicy as I had thought it was going to be. Jamie says to serve this in a sandwich, which is really low effort, but we had ours with chips and vegetables along with the gravy. I decided, while I was tucking in, that if I had a lot of people to feed and I was doing a Sunday lunch, I would make this and have it with roast potatoes, Yorkshire puds and gravy. The brisket was cheap - I picked up an 800g joint of it for just over £5. And it fed four of us, and made three generously-filled sandwiches for packed lunches the next day. You really do get your money's worth with a cut of meat like this. 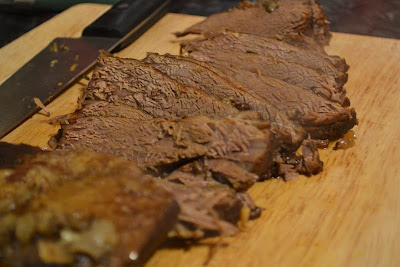 As for the broth that's made while your beef is cooking, don't waste it. I managed to drain off a mugful and it's in the fridge waiting for me to cook a beef stew with dumplings later in the week. I've had mixed success with recipes from the new Jamie Oliver book (more on that here), but this one ticks all the boxes. For economy, flavour and ease - I'd choose this for Sunday lunch in a flash.
Email Post
Labels: jamie oliver meat slow-roast