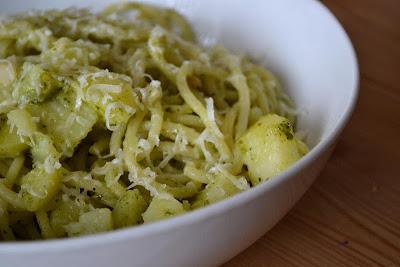 When I was about 20, I remember every time I went out for dinner I would order lasagne. With chips. Maybe it was a late-1990s thing, but every menu offered the two together as if they were inseparable. And even though the lasagne was cheesily stodgy, it seemed to work, probably because of the contrast in textures. But only if the chips were crisp. Big fat soggy chips were a no-no with a wodge of oozy lasagne.
And the other day I found myself reading Nigella Lawson's recipe for Pasta Alla Genovese, which incorporates spaghetti and diced potatoes. The potatoes actually break up in the pan and give the pasta a grainy, starchy coating. I tried it and it is unbelievably good.
And then, I noticed Adam Richman, the host of Man Vs Food sometimes orders a side of fries when he has to eat something sweet - like a huge ice cream, because he says you taste the crisp saltiness and then instead of just getting full up on the fries, you feel like eating more ice cream (I wouldn't advise on doing this, by the way; leave that to him...). So we could crave carbs because they offer a contrast in taste, as well as texture.

Chip butties, pasta with potato, spaghetti hoops on toast -there's a lot to be said for some carb on carb action, if only for a treat every now and again. 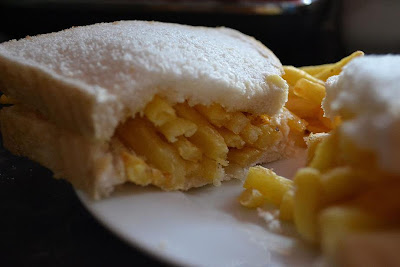