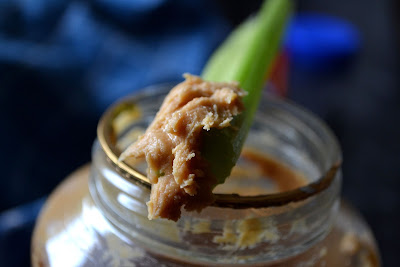 We all know celery as a snack, salad ingredient and slimming aid (the story goes that you burn more calories eating a stick of celery than you take in, but I suspect that doesn't include the peanut butter dabbed on the end). ;)
But this week has opened my eyes to the potential of this much-maligned vegetable. I didn't know, for example, that Fenland white celery was sweeter and less bitter than its green counterpart, and is in season between October and December. I also didn't really know that you could cook it. Not just to enhance the flavour of stocks and Bolognese sauces, but as a dish in its own right.
Fenland celery have even applied for PGI status.
So I decided to bake the celery in a creamy sauce. It tasted sweet and kind of nutty. Cooking the celery seems to take all the bitterness out of it, so you're left with a tasty cheesy side dish that would be great I think with some cooked ham or roast chicken. Here's how I did it: 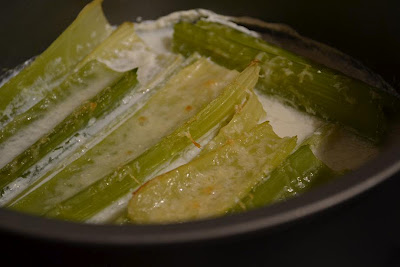 Creamy Baked Fenland Celery
Ingredients
Method
Preheat your oven to 180C. Take your celery stalks and cut them in half, arranging them in a medium-sized saucepan with the onion, bay leaves and peppercorns. Fill with water to just cover the celery and simmer for about 15 minutes, or until the celery is tender.
Once the celery is cooked, drain it, reserving the cooking water but discarding the peppercorns, bay leaves and onion slices.
Layer the cooked celery into the bottom of an ovenproof dish.
Return about 2 espresso cups worth of the cooking water to the pan and bring to the boil. Pour in a swirl of cream and a pinch of salt. Pour this over the celery.
Scatter over the Parmesan and bake in the oven for 15-20 minutes until the cheese has melted and the top of the celery has started to turn slightly golden.