Last week, I was invited to an event at Odette's in Primrose Hill that aimed to showcase how versatile Welsh Lamb was. As Odette's chef Bryn Williams adressed us all, he delivered a truth that I know I was guilty of. "We go in and buy certain cuts", he said "but we should be eating nose to tail". And it's true. We buy leg, lamb chops, and lamb mince - but are we making the most of cuts such as the shoulder, neck, breast, ribs and fillet? 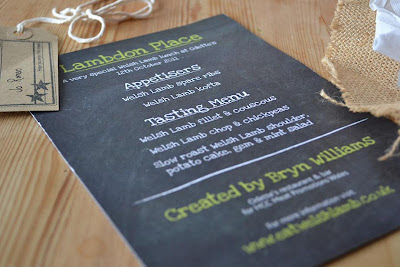 And although we usually associate lamb being 'in season' in the spring - Welsh lamb is actually at its most flavoursome now, in the autumn. Bryn told us that one of the reasons Welsh lamb is so special - apart from the hard work of the farmers - is down to the environment. Wales is surrounded by 1,200km of coastline, providing a supply of fresh, sea air - Bryn joked that the fact that it seems to rain all the time as well only adds ultimately to the flavour of the lamb, making the grass fresh and perfect for grazing.

Bryn laid on a five-course tasting lunch that showed us what you could really do with lamb - most of them quick, family meals but with one slow-cook option for lazy weekends.

Welsh Lamb Spare Ribs: cooked in a sweet and sticky Chinese-style sauce, with the meat falling off the bone. Bryn said that these were 'off-cuts' and would be cheap to buy from the butcher. If you can't get hold of them, start asking for them. Bryn said: "it's supply and demand. If people want them, they have to stock them."

Welsh Lamb Koftas: these were served in a little buns like tiny burgers - soft, and with the flavours of cumin and mint. I'm going to try making something like this myself, I reckon the children would love these.

Welsh Lamb Fillet and couscous: This succulent little strip of meat is pan-fried for only about three minutes and would be a quick and easy meal along with the couscous which was flavoured with chicken stock, parsley, mint and lemon juice.

Welsh Lamb chop and chickpeas: Again, full of flavour and another quick and easy meal option. I loved the chickpeas alongside the lamb, which was still pink and really tender.

Slow roast Welsh Lamb shoulder and potato cake with gem and mint salad: Before it was plated up, Bryn brought out the roasting tray for us to have a look at. On it were two lamb shoulder joints on a rack above some thinly-sliced potatoes. The fat from the lamb drips onto the potatoes over the hours it takes to slow cook and gives them a really rich flavour. The lamb and potatoes were served alongside a little gem and mint salad, which helped to refresh and perk up all those deep, rich flavours of the lamb and potatoes. And this is easy to cook. "If anyone says they can't cook, I'd challenge them on this one," he said. 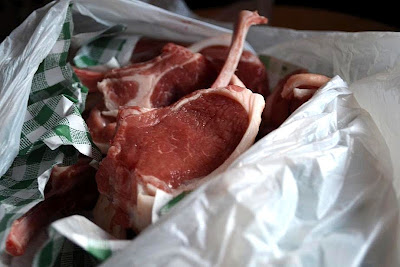 I went away realising two main things. The first was that many of us are guilty of 'pigeon-holing' our meats. We only buy certain cuts and anything out of the ordinary is left on the shelf, most probably because we feel daunted by it and don't know how to cook it, which could, let's face it, be solved by looking at a cookbook, the internet or from a chat with your butcher. The second thing is that I aways considered lamb a slow-cook meal. I know that chops and steaks don't take long to cook under the grill, but at home we save lamb for our roasts, slow-cooked curries and stews. There are so many ways to cook lamb quickly and it doesn't have to be only for a special occasion. And Bryn put his own personal stamp on Welsh lamb. He told us "I don't cook it because it's Welsh, I cook it because it's good."

Quiz your butcher for the cheaper cuts - he'll be glad to sell them to you rather than them end up left on the block - and I know mine doesn't mind me asking him a few questions on how best to cook them.

I didn't take any photos of the food but to see what we ate for yourself, visit the Gourmet Chick blog, which has some great pictures. Just looking at them makes me want to go back! For more information on Welsh Lamb visit the website.

How do you like to cook lamb? Do you only tend to buy the popular cuts or do you try and experiment?