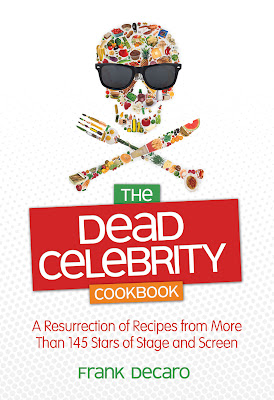 I love old movies. As a teenager, while all my friends were swooning over New Kids on the Block and Nick Kamen I became obsessed with classic movie stars like Rita Hayworth, Marilyn Monroe and Clark Gable. I bought Rat Pack CDs, listened to rockabilly on the radio and read loads of biographies. On a rainy day I'm still happy watching an old James Dean or Humphrey Bogart film while munching on a bacon sandwich or slurping noodle soup.

So when I found out about The Dead Celebrity's Cookbook I was - admittedly a bit morbidly - thrilled. In it, there are recipes from greats such as Claudette Colbert, Mae West, Frank Sinatra and Eartha Kitt. A whole chapter is dedicated to Lucille Ball, who's recipe for Chinesey Thing bears little resemblance to the Chinese food we know nowadays but gives an insight into the perceptions of Chinese food in the 1950s'.

I couldn't turn the pages quick enough - there was a whole chapter dedicated to recipes from The Rat Pack, featuring Frank's leg of lamb, Dean's burgers and Bourbon and a salad from Sammy. Batman also makes a star appearance - from Cesar Romero's (the Joker) Spanish rice dish to Eartha Kitt's (Catwoman - purrrrr) chicken wings. If you want to get closer to your favourite stars this book is an excellent find.

As well as the classic movie stars, there are also recipes from stars that have recently left us, such as Elizabeth Taylor, Patrick Swayze and Michael Jackson. I was surprised though, for all his love of eating and famed appetite that Elvis was nowhere to be seen in the book. Nor classic movie icons Marilyn Monroe or James Dean.


Each recipe comes with carefully researched anecdotes about the star's life, little-known facts (did you know that Otto Preminger (Mr Freeze in Batman) had a baby with 1960s' stripper Gypsy Rose Lee? I didn't.) and even when the original recipe has been found to be too bland for modern palates there are suggestions for changes that can be made. As well as this, I love that the book suggests corresponding movies, music and scenery if you're planning a 'Rat Pack' night for example. What better than to serve Frank's leg of lamb, sip on Jack Daniels and watch the guys on DVD?

It's clear that Frank Decaro is a Hollywood fan. The tone of voice throughout the book always pays respect to these stars but the writing is funny and unpretentious.

I really enjoyed the book - it's a great idea for hosting a 'dead celebrity' party for Halloween and would be a fantastic talking point throughout the party. In fact I think that may well be my theme for Halloween this year, now I've read this book.

A great book for any movie star fan - and it gives a little peek into the lives of these stars that are sadly no longer with us but are still adored all over the world.