When I heard that this month's Forever Nigella theme was Picnics (hosted by Fuss Free Flavours), I knew what I was going to cook. It's a recipe I'd read years ago and somehow never got round to buying the ingredients for and making it. It's Nigella's Pizza Rustica - or rather a version of it as I fiddled about with quantities and added some things. 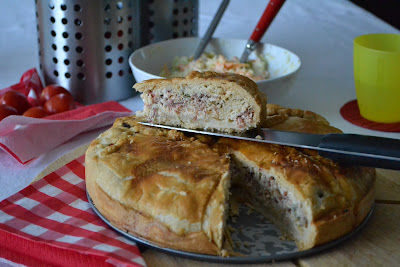 When I first read the recipe, I imagined it as some kind of Italian-ised pork pie filled with proscuitto, pork sausage and mortadella. But, while making my shopping list I realised how much cheese there is in the pie. A whole ball of mozzarella, one large tub of ricotta and a big chunk of Parmesan, as well as some smoked cheese too. So what you actually get is a bacony, cheesy pie rather than one packed with tons of pieces of meat, which is what I first expected.

I love the look of the pie - it has a really homely, almost Medieval look about it, all rustic and knobbly. The pastry isn't completely uniform in thickness, and if any of it splits a bit while you're lining your tin, just patch it up with other bits as you go along.  And when you pour the creamy filling into the pie case, don't despair. It will harden on cooking, into a light but intensely savoury pie.

I substituted Nigella's home-made pastry for shop-bought shortcrust pastry, not because I felt it would taste better - in fact the opposite is probably true - but just out of sheer convenience. I know that making pastry is easy, but I wondered if shop-bought would work and it did. 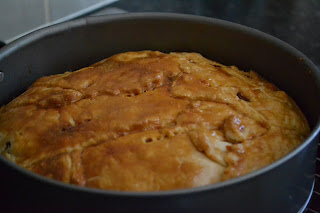 I also increased the quantity of sausages for a slightly meatier pie and added some smoked streaky bacon in place of the mortadella in the original recipe. I couldn't get smoked provolone from the supermarket and so opted instead for some of the smoked Austrian stuff you get in those little orange sausage-shapes. And in the original, Nigella specifies using half a garlic clove. Hating food waste in any form, and not knowing really what I would do with the other tiny half of the clove, I chucked in a whole one.

And the result was a firm, shallow but magnificent egg-glazed pie. We ate ours cold, and I would take this to a picnic any day. Nigella reckons you would get 10 slices out of this, which works out at a cost of 84p per serving, which is pretty good. I've written out my version here.