We went fishing with some friends last week, and as we were all saying goodbye in the marina car park, one of them handed me a little glossy package. He explained that a relative had been over to the Kennedy Space Center to see the Atlantis landing last month, and brought them back some space ice cream to try, and did I want to try some. To be honest, I couldn't snatch it out of his hands quick enough, despite his wrinkled nose and warning that it tasted 'like a cross between ice cream and cardboard'. 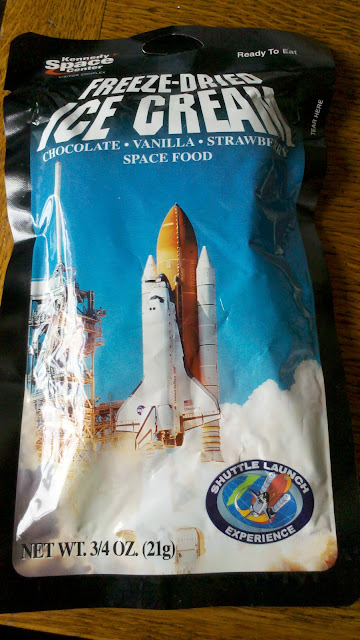 The package proudly advertised itself in space-age '80s font as 'Freeze dried ice cream'. Blurb on the back of the pack said that this 'space treat' was originally developed for the Apollo Missions, and it basically consists of real ice cream that is frozen to -40 degrees Fahrenheit before being vacuum dried and packaged in its 'special polyfoil pouch'.

Ingredients-wise, I was quite surprised as I expected there to be weirder ingredients, and names of things I couldn't even read - but it was basically what you'd find in your average ice cream pot: milkfat and non-fat milk, sugar, corn syrup, whey, cocoa, flavourings etc.


And so onto the space ice cream itself: You just tear open the top of the pack, and carefully pull out a little paper-wrapped slab of pale pink, white and beige chalky stuff. Then you place a bit in your mouth and suck. For the first few seconds you can't taste anything, it does feel a bit like you have some polystyrene or cardboard in your mouth. But then as the ice cream begins to melt, it's sweet, kind of creamy and tastes pretty much just like ice cream. We all sat around the table, with a piece of this in our mouths, frowning at each other waiting for the reaction - but it just tastes like ice cream. Of course you don't get the chill of regular ice cream, and it tastes warm - that is kind of weird, but you get used to it. 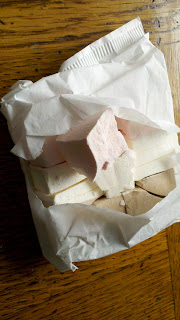 And so it wasn't actually that bad at all. And let's face it, if you're 250,000 miles above the surface of the Earth, needing an ice cream fix, I'd say it wouldn't be bad at all.