While I was mooching around the Fresh Food Festival in Reading I was given the chance to have a chat with James Martin, before his morning cooking demo. We talked about comfort foods (what else?!), recipes from his childhood and what he's up to next.

The first thing I'll say about James Martin is that he came  across as really welcoming - he stood up to greet me - and told me that he loves to eat bacon sandwiches as a comfort food. When it's not bacon sarnies, he does love a good fish and chip dinner. "It's better in the north, especially the north-east", he said. I talked about when I lived in Hull in East Yorkshire and found the fish and chips there so much better (sorry southern folks!) than in my home town in the south. "Well then, you'll know", he said. "It's the dripping. Down south they use sunflower oil I think, up north they use the traditional beef dripping". It makes a big difference to the taste. He also said that the fish is better in quality up there because it comes in straight from the North Sea. And the mushy peas issue? "Well, that's what we call the caviar of the north", he smiled.

When we finished debating the science of the best fish and chips, I asked him if there were any foods he enjoyed as a child that have influenced the way he cooks now. "Well, my Yorkshire Pudding recipe is still the same that my great grandmother cooked", proving the old line that if it ain't broke, don't fix it.

So what's next for James? He just got back from Africa (the reason he wasn't on Saturday Kitchen last week, but don't worry he said he's back on this week), and he's about to jet off to the Mediterranean. With appearances at food festivals like this one, book signings and jetting off to far-flung places, he's certainly very busy. I thanked him for his time, he gladly posed for a pic and then I left him to his radio interview.

As I emerged from backstage, I saw Lesley Waters sitting on the steps and couldn't resist having a chat with her. She was really approachable and sat me down next to her for a quick chat. She spoke with twinkling eyes about her favourite comfort foods - cheese ("I call it the devil's food") and bread ("I love bread"). She also loves a good roast dinner. But which one? "I would have used to say beef, but I think that now I prefer a good roast chicken," she says, adding "sometimes I think the extras with a roast dinner are as good as the actual meat". We talked cocktail sausages, yorkshire pudding and 'proper' gravy - "None of that powdered stuff", she agreed.

She told me that she sometimes thinks it's sad that people don't cook for themselves when they now have cookbooks, TV shows and so much information at their disposal. I asked her if she thought it was about time constraints and busy lifestyles. "It's confidence", she stated. We talked about people that buy hoards of cookbooks but don't cook. She shook her head. "They need to take all the money they spend on cookbooks and spend it on cookery courses". She now teaches at a cookery school and she told me that she loves to teach, and finds it rewarding when  people come in with few skills and leave with all the tools to go and cook in their own kitchens, from scratch.

When I chatted with Lesley I found her really down to earth and realistic but she's also very passionate about food, and especially teaching. She's got a new book coming out too, so it's a busy time for her. I thanked her, and off she went to get ready to host the James Martin cooking demo.

James Martin's Cooking Demo
Before Lesley made the introductions, there was a busy and excited atmosphere on Reading's Riverside. People packed onto the steps in front of the stage, the stage itself was busy with people prepping food and organising pots and pans. Lesley whipped up the crowd "I'd like to think all you ladies have come to see me, but I don't think that's the case", she smiled.

A few minutes later, James took to the stage, put on his apron and talked to Lesley about the food discoveries he recently found in Africa: "There were melons as big as this oven!" he remembered. Lesley also questioned him on cooking for "some very special people" the night before. "Yeah, it was Will and Kate", he said. He explained that he'd cooked them dishes including a smoked salmon dish, and a lemon tart. "No one said thanks, and they all cleared off", he joked, adding that that was what you expect anyway. "Did they ask for seconds?" Lesley asked. "There wouldn't have been any, if they had," he quipped in his Yorkshire accent "we fed them in the Yorkshire way: you get what you're given". The crowds loved it. 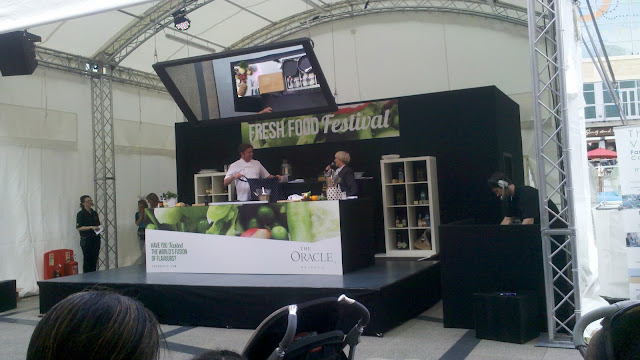 He gave everyone a run down of the four dishes he was going to cook in 45 minutes "Will we have enough time?" he smiled, uncertainly. "Well we don't have to do it in 20 minutes", quipped Lesley, a reference to their Ready Steady Cook days.

The smells were amazing as James whipped up dishes including Welsh Rarebit, pan-fried mackerel, duck breast and chocolate puddings. He also promised some candy floss for the kids. 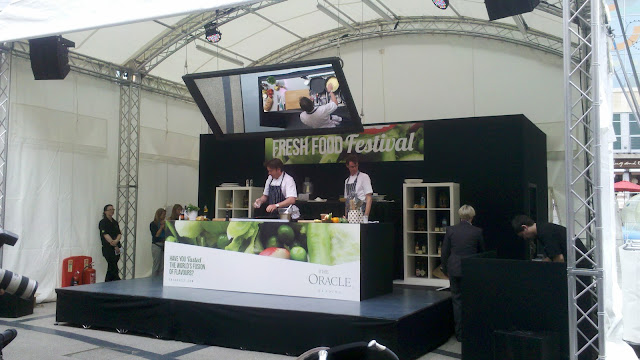 A few of James' quotes during the show:
For more information the producers I met along with their fantastic food at the Farmers Market at the festival, click here.
Email Post
Labels: festivals