Fusion Taste Team time again! For this week's Worldfoods challenge, we were given the Malaysian dish Ayam Percik to cook. Ayam Percik is a spicy Malaysian dish which translates as "chicken splash" - because while the marinaded chicken is grilling, more of the marinade is 'splashed' on to the meat while it cooks. I tweaked it a little bit, as you'll find out in a sec, but here's how I got on. 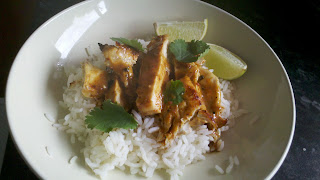 How I Cooked It
First of all, I spooned 4 tablespoons of the Coconut and Chilli Worldfoods marinade into a bowl, and then stirred in 1 tablespoon of natural yoghurt. This was because we had been warned that the Ayam Percik would be a bit spicy and probably not for sensitive tastes or young children. As I was cooking for my husband (who winces at the mere mention of a chilli) I decided to tone it down a bit.

I took a large chicken breast (I used organic, no skin), placed it on a chopping board and covered it with a layer of clingfilm. I then bashed it with a rolling pin. The aim of this was to flatten the chicken breast, as left in its natural state it can be dry when cooked. Bashing it so that it was all an even thickness meant that the chicken would stay juicy and cook quickly (hurray!).

I left this in the marinade for half an hour, while I put some plain white rice on to boil.


When the thirty minutes were up, I heated up a small wok with about a tablespoon of vegetable oil, and dropped in the chicken breast with a sizzle. The chicken took 5-6 minutes to cook through, turning a few times while cooking, until it was nicely charred. I took out the chicken and placed on a board to rest, while I poured the leftover marinade into the wok to heat through gently.

The chicken was served sliced up, on white fluffy plain rice and the heated leftover yoghurty marinade poured over the top. I also sprinkled over a few coriander leaves (because I had them handy) and served it up with wedges of lime for squeezing over.

The Taste
The taste was absolutely terrific. There wasn't the weird after-taste that you sometimes get with jars of marinade or stir-fry sauces, it tasted like coconut and chilli because that's what's in it. There are no artificial additives, which is always a plus. Even though I'd cooled down the marinade with a spoonful of yoghurt, the charred strips of chicken still had that spicy tingle, and it was really pleasant to eat, even for my husband. Next time I cook it (and there will be a next time for definite) I will a) cook it for myself and go with the full heat and not cool it down to see what the flavour is like when it's 'full on'. And b) I will make more chicken and save some for baguettes, sandwiches and salads in the week. The sauce can also be used for stir-fries, too. If you do cook it I would definitely recommend squeezing over some lime - it seems to freshen up the sauce and give it another level. Ayam Percik - sweet, spicy, aromatic and totally gorgeous.