Spanish food has a special significance in our home, because my husband's grandparents were from Spain, and whenever my husband smells anything cooking with a hint of saffron or paprika he's transported back to when he was a boy standing in his grandmother's kitchen. They say that comfort food has a lot to do with childhood memories and it's really true in this case.

So with this in mind, I decided to cook a Spanish Feast. I found myself on the Schwartz website, which had some Spanish dishes and set to work. Firstly, I went for the traditional flavours of paprika and saffron in a seafood with pasta dish called simply 'Fideau'. Hubby says that the word 'fideos' is used to describe a dish containing pasta shapes or even noodles. Anyway, it was aromatic and delicious. I substituted the macaroni in the original recipe with conchigliette, tiny delicate pasta shells. Shells with seafood just seemed to go so well (predictable I know) and I love their softer, more delicate texture. Some crusty bread is also handy for mopping up those lovely amber saffron-stained juices. 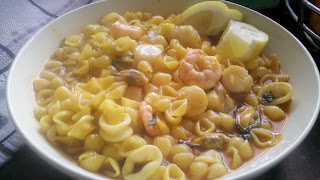 I also cooked the Cod Basque Style. Sliced parboiled potatoes are laid out on the bottom of an oven dish, fish stock is poured over them and then cod fillets are laid out over the top. A shake or two of seasoning and spices and then you cover the whole lot with foil and leave for half an hour in the oven. (The recipe states to leave for 35-45 minutes but start to check the fish after 30). 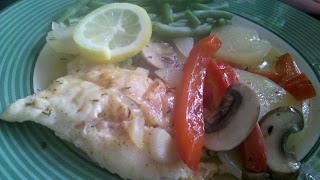 The potatoes take on all the flavours from the fish and are creamy and soft, while the cayenne pepper in the sauce gives the dish a little 'kick' in contrast to the fish. The sauce is easy to make, and you stir it in a saucepan in the last few minutes of cooking the fish. 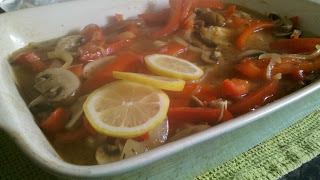 Finally, I also made Catalan Toasts. Slice up a baguette, toast on both sides, spread on some pureed garlic, rub in a tomato or three and then twist up little slices of serrano ham and place on top of the toasts. A little drizzle of good, green extra virgin olive oil and they were good to go. These would make a really stunning little party food. You get that pungency of the garlic, the crisp toast and the moisture from the tomatoes and then the salty ham. Finally you then get that rich sweetness from the olive oil. 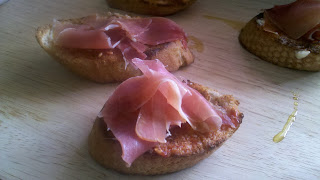 Do you have any food memories from Spain, or any interesting family connections that have influenced the food you eat? What are your favourite Spanish-style dishes?
Email Post
Labels: holiday food spanish