I received an email from the English Provender company, asking if I would like to review one of the cooking sauces they've recently released. Now, I have always felt that comfort food doesn't have to be cooked from scratch. Sometimes you want something soothing, or something that provokes holiday memories to cheer you up on a grey day - but you want it in 15 minutes flat.

So I was really happy to road-test the Very Lazy Caribbean Chicken concentrate. The instructions were simple enough. You just add diced chicken, a 227g can of pineapple cubes (including the juice) and half a can of coconut milk. The sauce was to do the rest, which was fair enough. 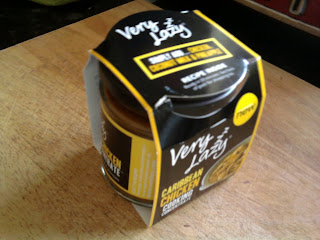 The Taste
From the first impressions I initially thought that the concentrate would be more of a paste - like a Thai curry paste - but it was much more sauce-like. Having tried Caribbean food before, I was worried that it would be a little too peppery or spicy (I've said before that my family are chilli-wimps) but it wasn't.

I've never been to the Caribbean (poor me) but I went to a Caribbean food market about a year ago and tried a curry dish there and it was very peppery, and head-blowingly spicy. I took that as authentic Caribbean cuisine, and decided that I didn't like it very much. Now this - it's much less spicy than I expected and doesn't taste of pepper. It has a much sweeter, fruity taste (probably down to the mango in it) and although it definitely does have a real chilli 'kick' to it, you don't have to fan your mouth after each forkful. I don't know if it's strictly authentic, but I liked it, and it's renewed my interest in Caribbean food. I'd definitely cook it again. 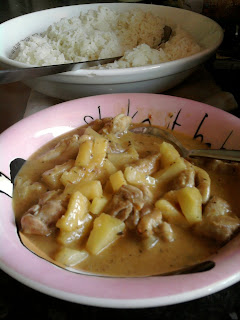 Ease of Use
The instructions are printed clearly on the cardboard sleeve that the jar comes wrapped in, and they were so simple that I kept thinking I had missed something out. You just stir fry some diced chicken (the instructions state chicken breast but I used diced thigh) until it's cooked, tip in the sauce and add the pineapple pieces and their juice. Let the lot bubble for 15 minutes and then serve with rice. After a long day at work, when you have to conjure up something warming it would be brilliant. The concentrates also come in different varieties, including Coq au Vin, Posh Sausage Casserole and Creamy Chicken.