Years ago, at university, I made a pizza in a frying pan, from a recipe out of a magazine. The dough wasn't cooked through and tasted of flour, the top was soggy and too cheesy and the bottom was fried and greasy. So you can understand me being hesitant about trying Jamie Oliver's Cheat's Pizza recipe from 30-Minute Meals. But it was in fact the easiest pizza I've ever made. 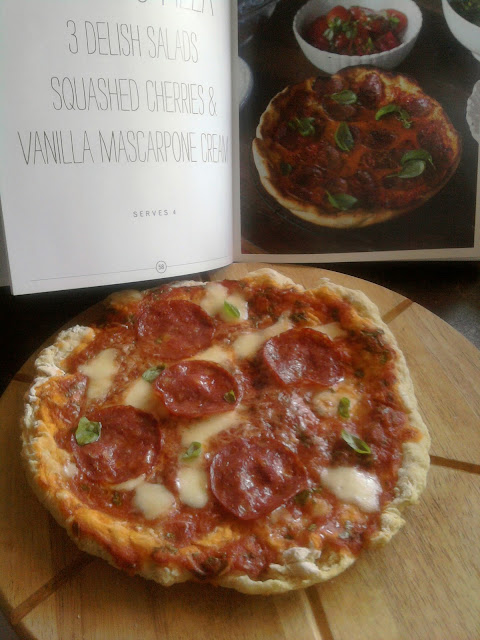 Now, I don't know that you could call this pizza completely authentic - there is no yeast, waiting for dough to rise and barely any kneading, a fact that Jamie is quick to admit on his show. The dough is made from self-raising flour which gives the pizza dough more of a scone-type of texture, but as long as you roll it thin enough, you don't really notice. And of course you've put it all together in far less than half an hour. If you make this, I would suggest that if your frying pan is not as wide as Jamie's - definitely split the dough in half and make two pizzas. The first time I made this I didn't, and the puffed up pizza dough was just too thick and claggy. 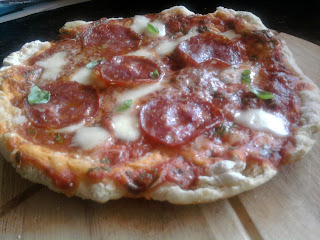 And so on to the sauce. It's easily blended together, and the red wine vinegar just gives it that sharpness that counteracts all that bland mozzarella and Parmesan. When I made this the first time though, I made the mistake of putting too much of the sauce over the top of the pizza. You don't want it too soggy, so just spread enough to cover the top and out towards the edges before you scatter over the mozzarella. Keep any un-used sauce in the fridge for pasta or for when you make another pizza. A pool of tomato sauce sitting in the middle of your pizza and the cheese slipping off it is not a good look.

Which brings me to my final warning about this pizza - don't put too much cheese on! Rip off small strips of the mozzarella and dot around the top of the pizza - as it melts under the grill, it will spread out more and cover the pizza. The grating of Parmesan at the end just blends all the cheese on top together. This of course makes it much healthier than your regular pizza that's bending under the weight of all that cheese - especially if you serve it with Jamie's tomato salad!

The verdict? Definitely a keeper. But don't expect it (the dough, anyway) to taste and feel like traditional pizza bread, because it isn't. But it doesn't detract from the pizza, which when you consider that you could rustle it up a lot quicker than warming up a pre-packed one from the freezer - and it tastes much better - is really good. This dish has become a regular in the Comfort Bites household and it's easy enough to put together when you get those pizza cravings.