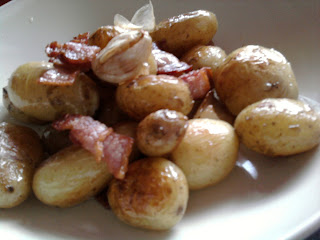 I look forward to this time of year for the Jersey Royals - it's so good to look forward to a really tasty seasonal, luxurious product around April time each year. Usually, I eat them plain - boiled until tender, with a pinch of salt and perhaps a melting knob of butter trickling down them. But I thought I would do something a bit different this time.

I used some of The Jersey Royal Company's Jersey Royal Pearl potatoes. These are small, round potatoes that have the distinctive Jersey Royal flavour - creamy and fragrant. By cooking them until they are tender and then browning them in a hot pan they are meltingly tender inside and golden on the outside. The garlic is subtle - it's not chopped but left whole, to bash around the pan in its papery skin. The salty, smoky bursts of flavour with each mouthful come courtesy of the snipped, streaky bacon, fried until crisp.

The Jersey Royal Company website has a similar recipe, but the potatoes are roasted in the oven along with thyme, garlic, bacon and maple syrup. This, or the recipe below I think would work really well with a plain roast chicken, or a white fish dish.

Jersey Royal Pearl Potatoes with Bacon and Garlic
Serves 2, as a side dish

Ingredients
Serves 2, as a side dish