Since my post where I stuck up for Jamie after all the negative criticism surrounding his 30 Minute Meals book, I have become quite obsessed with trying out the recipes from it and pitting myself against the clock, just to see for myself what all the whingeing was about. The latest recipe to be given this treatment is the Chicken Pie dinner, which comes with French Style Peas and Carrot Smash. (page 90 of the book)

Chicken pie for me = comfort food on a grand scale and I wasn't disappointed. But did I do it in 30 minutes? Read on to find out! 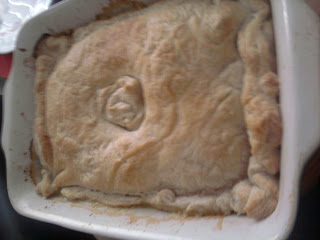 Firstly, a confession. The meal comes with a Berries and Cream dessert, which I didn't make, as my husband and children don't like berries and I didn't have any in the fridge - or any cream for that matter, either. As the dessert consists of basically slicing up strawberries and putting them in a bowl with some berries and then sprinkling over a dressing, I figured that this would take about 5 minutes to make. So the aim was to create the chicken pie, peas and carrots in 25 minutes or thereabouts.

Firstly, the pie. The filling was super easy to make. Jamie says to make it with chicken breast but I made mine with diced organic thigh fillets just because everyone here prefers the darker meat. It only takes a little bit of extra cooking time and the chunks of meat in the pie were juicy and tender. Using ready-rolled puff pastry makes this worth it because all you have to do is unravel the pastry from its blue plastic sheet and tuck over the pie filling. The only critisicm I would have is that Jamie says to flour a work surface and then put the pastry on it, and score it to make the diamond effect. I didn't see the point in wasting the flour so scored it lightly once I'd put it over the pie filling. It was quicker and less messy this way, as long as you're careful not to cut all the way through. 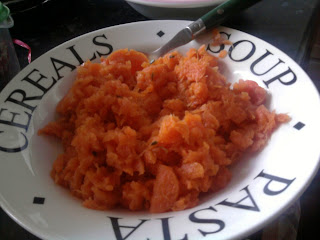 The carrots just needed a slice up and then a 15 minute simmer in a pan with some water, olive oil and thyme. Easy. The peas I was a bit less sure about. Simmering frozen peas with sliced little gem lettuce and chicken stock with flour & butter. But it was full of flavour and I ate probably more of them than I should. They also have mint and lemon juice and the children didn't take to these "new peas" but I will definitely make them again. 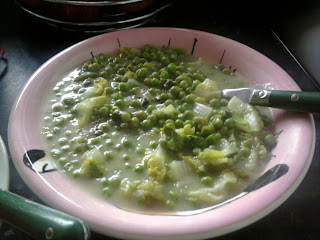 Problems:
Apart from the extra step with the flour and pastry, I have a small kitchen and found that when cooking this recipe I often lacked the space. I had to keep tidying up (sometimes even washing up) as I went along, which added time to the recipe. I also had to deal with two curious and hungry children while cooking, which added a bit of time on too. And yes I was naughty and didn't get all my ingredients together in the beginning so had to make last second trips to the fridge and to the backs of the cupboards to find things. The whole thing, from flicking on the gas to serving at the table, took 38 minutes (minus pudding of course).

Verdict:
Yes, it took longer than it should have. But the flavours were incredible. The peas in their chickeny, creamy sauce were really good. The pie itself had chunky bits of juicy, tender chicken and the sauce was creamy and aromatic with the spring onions and thyme. It also tasted really light, probably down to the creme fraiche used and not cream. The pastry was crisp and fluffy. The children also love the idea of serving and sharing food at the table, even if it means it is easier and more tempting to have seconds!

It did take longer than stated but I had children, lack of worktop space and rifling around for ingredients to deal with. Plus I used chicken thighs which take a tiny bit longer to cook. I loved it. And you have to admit: a chicken pie to feed six people, with two delicious vegetable sides in 38 minutes from scratch is pretty good going.

Have you made this 30-Minute Meal? How did you get on? Share your comments below!
Email Post
Labels: healthy comfort food jamie oliver meat savoury