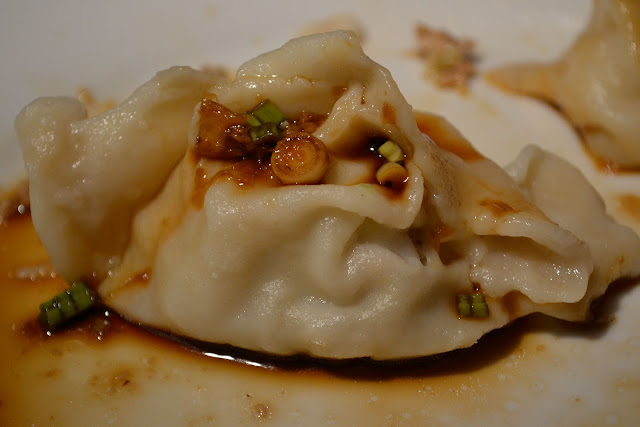 Now I said this recipe was easy; I didn't say it was going to be quick. The mixing of the pork is quick, filling them into the dumplings and sealing them is quick - even cooking them is quick (6 minutes!). The part that takes the longest is rolling out all the little white discs. You can buy dumpling wrappers in some Chinese supermarkets - but these are only made with flour and water so they are super cheap to make. And sometimes a bit of repetitive activity in the kitchen is kind of therapeutic. 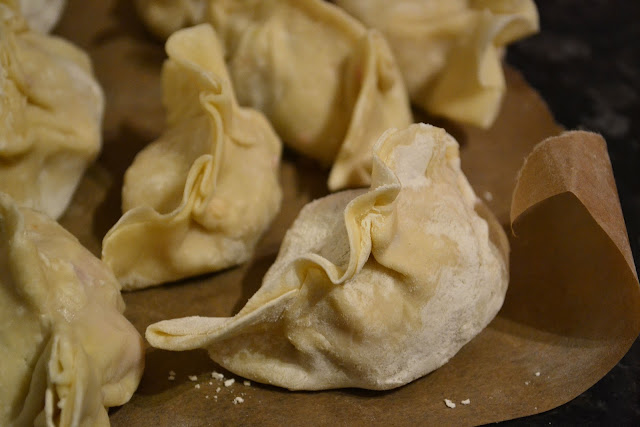 I love Chinese dumplings but up until now I've always been intimidated by making them myself. I found a video on You Tube by Working Class Foodies with a pork and leek dumpling recipe and their friendly, easy going approach made me try them, at last. And I was so pleased I did. Soft, succulent pork meat with a gentle gingery tingle on the tongue, speckled with green flecks of spring onion and leek. The dumpling wrapper is doughy but still soft, white and bouncy.

I've made them loads of times since then, tweaking measurements a little here and there - and so I bring to you, Chinese dragons slinking in the background, these gorgeous Chinese pork dumplings complete with their dark dipping sauce. Happy Chinese New Year everyone x 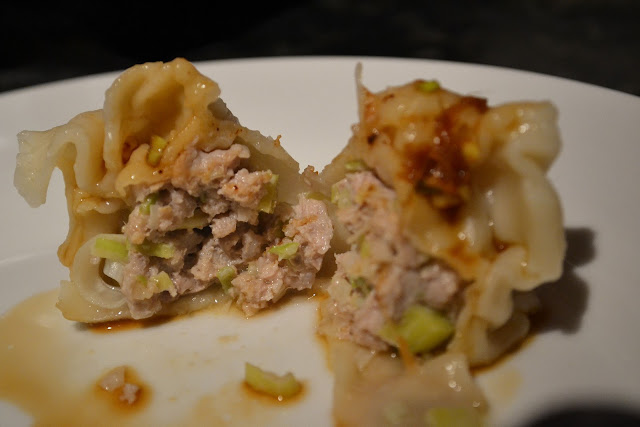 Chinese Pork and Leek Dumplings with Dipping Sauce (makes about 15)

Method:
Here goes:
To make the dough: combine the flour and water and mix to form a craggy dough. Add a little more water if you find the dough too floury. Tip out onto a lightly floured surface and knead for two minutes until smooth. Wrap in clingfilm or place in a plastic food bag and sit it in the fridge for about 10 minutes, while you make the sauce and filling.

To make the dipping sauce: Combine all ingredients in a small bowl and mix well. Put to one side.

To make the dumpling filling: Mix the pork mince, leek, spring onions, garlic and ginger with your hands. Cover with cling film and put in the fridge.

Rolling the dough (you might want to get out a chair):
Remove the dough from the fridge and pinch off about a tablespoon's worth. Sprinkle a light dusting of flour on the work surface and roll out into a small circle. It doesn't have to be exact. The easiest way to do this is to roll from the centre of the circle outwards and then turn the wrapper a quarter turn before rolling again. You want a thickness similar to when you make fresh pasta - not too thin, not too thick. Go with your instincts here. If they are too thin they will break when you fill them or when they are being cooked.

Filling and cooking Put a large saucepan of water on to boil. Take the pork mixture from the fridge and fill each dumpling with a teaspoonful of the pork. Here's the video I used to help me get the hang of it:

The important thing here is to go careful so they don't rip - and not to bunch the wrapper up at the top, money-bag-style, like I did when I first made them - you will be left with a hard, raw piece of dough. Aim to make a little line of pinches, like in the video.

Drop each filled dumpling carefully into the boiling water and cook for 6 minutes. Lift out with a slotted spoon, drain briefly on kitchen paper and serve hot, alongside the dipping sauce. If you have any dumplings left over, you can freeze them (as long as the pork hasn't been frozen before). 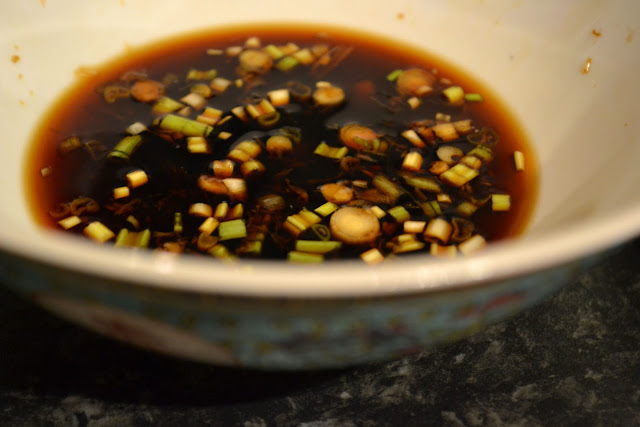